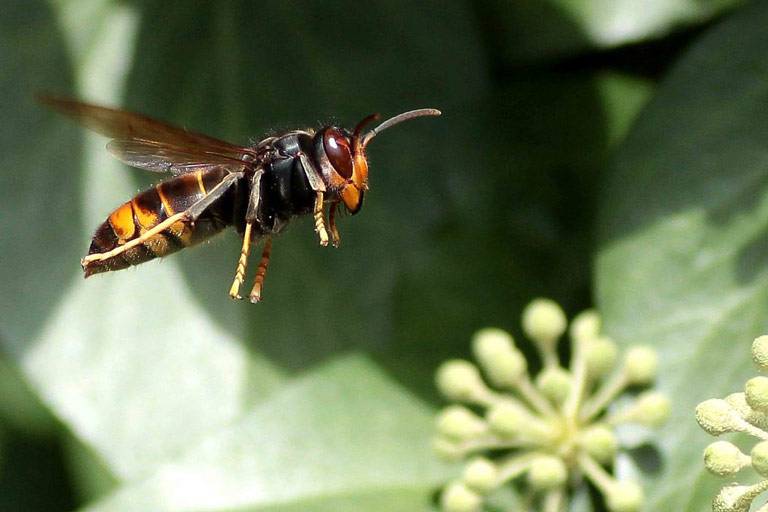 Among the many threats to these fragile little beings that are bees, there is one on which men seem to have little control: the asian hornet.
Imported involuntarily in France in 2004, Vespa Velutina is now able to decimate colonies in a record time. It attacks the hive to feed on larvaes and steals the honey.

The ones acclimated in France belong to the Nigrithorax variety, recognizable by its yellow legs, dark wings, black thorax, and its dark abdomen surrounded by a yellow-orange ring marked with a black triangle.

Since its introduction, this hymenopteran continues to cause harm to the beekeepers. Some of them have lost up to fifty percent of their colonies. So the UNAF (Union Nationale de l’Apiculture Française) asked the Ministry of Agriculture to classify the asian hornet as a health hazard of first category. In 2012, this hornet was considered as a health hazard of second category, that is to say less serious, but today beekeepers want to ring the alarm facing a real problem which, added to the pesticides, threats bees of extinction.

The insect, larger than a bee, slips into the hives and captures the defenseless workers in order to feed its larvaes with them. Beekeepers feel powerless against this recent scourge as they can not see the end of it. Fruit growers are also affected as the asian hornet also eats fruit and causes damages in orchards.

From a more global point of view, regarding the danger of the asian hornet venom, it seems that it is not more dangerous than the one of the native species. Normally the hornet keeps its distance from human, but cases of complication from hornet stings were recorded, which is why we should remain cautious. The bees are actually most threatened by this predator. On its side, the hornet has very few predators: Only birds as the Red-backed shrike or the honey buzzard can attack this aggressive and large insect.

In Asia bees have developed defense strategies against this predator: A dense mass of workers surrounds the hornet and, vibrating wings, increases the temperature of the hive until their opponent dies of hyperthermia! After 5 minuts, the temperature reaches 45°C and the hornet dies but not the bees that are able to resist more than 50°C. In Europe, our bees begin to learn to defend themselves, but their strategy is not really efficient yet since the invasion of the predator is more recent. And when the bees manage to set up an organised defense, it exhausts the colony that devotes then less time to supply and the hive is weakened.

Facing the carnage various solutions have been considered, such as the systematic destruction of hornet nests, which do not contribute to ecology. Using chickens that eat the hornet and not the bees can also be a solution. More recently, researchers have found that a variety of wasp could destroy the nets of the asian hornet. Beekeepers are considering alternatives to finally manage to stop the massacre.

The bees are really fragile beings threatened from all sides and it is of prime importance to be conscious of that, as our future depends on them… 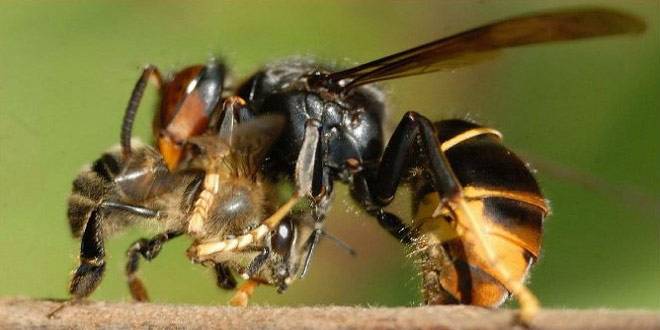 You too can participate in the protection of bees , by making yourself an asian hornet trap!

To do this, simply cut an empty plastic bottle in the upper third.

To make sure not to trap non-target insects, you can make small holes in the top of the bottle with a piece of heated wire. Put the trap at height of 1,50m to 2m approx.

It is better to put the trap between February and the first heat of May because beyond this period you may trap more native species. Whereas if you manage to trap a hornet, it is a whole bee colony that you can save!