(Source: Ministry of Education and Research)

The bees are leaving their hives and billions of them disappear. The phenomenon now affects the whole planet. Qualified as an ecological disaster, it now threatens agriculture and thus the survival of humanity. Yet, even if it is multifactorial, the decline of bee colonies seems to be mainly caused by human activities and its influence on the ecological balance.

A phenomenon not so new

In 2006 and 2007, the United States ring the alarm bell: bees are disappearing in a massive and brutal way. Indeed, throughout the world, a very high bee mortality rate is registered at the end of 2006 and after winter 2007: 60% of the colonies in the US and up to 90% in some states of the East and South have disappeared. 40% of the hives are emptied in Quebec, 25% of the colonies were decimated in Germany, Taiwan, Switzerland, Portugal, Greece and many other European countries. For the first time, an estimation of potential financial losses associated with the disappearance of bees is announced: nearly $ 15 billion, for the United States alone. Following this worrying news, the media alerts the public opinion. However the sudden extinction of bee colonies is a phenomenon that has been known for a long time: at least since the 60s in the USA, with a first serious study published in 1979.

The collapse disorder of a colony, a massacre without corpse

Since the nineteenth century, we find traces of bee colonies dying suddenly. But the current outbreak has its own characteristics. First of all, it is global. Then, the disappearance of bees is spectacular: almost overnight the hive is empty and we do not find any corpse. This Colony Collapse Disorder (CCD) is described since the late 70s. It is characterised by the absence of the workers, only remain the queen that continues to lay eggs and some very young bees. The few remaining adults are infected with several viruses and fungi, the brood is capped, and there are still stocks of food (honey and pollen), which, strangely, are not not looted by the other bees and are attacked by the usual parasite very lately. In the hives that are about to collapse, it may be noted that the workers are young adults and that their number is no longer enough to ensure the care of the brood and the swarm refuses to eat the food brought (corn syrup for example).

The causes: bees attacked from all around

Pesticides and other phytosanitary products

In France, in 1993, beekeepers suffer from a very significant drop of honey production. They denounce the use of Gaucho, a seed insecticide made of imidacloprid, recently put on the market. The case is a scandal and contradictory scientific studies are published. In the end, it turns out that imidacloprid is highly toxic to bees and that it is found in the pollen even if it is only used as a seed insecticide. Moreover, it remains in soil years after. Yet there is no proof that it is the direct cause of the mass death of bees. Indeed, some colonies are reached in areas where it is not used. After the Gaucho, the Regent, made of fipronil is in question, and between 1999 and 2006, both are progressively forbidden on various crops in France. In any case, it is clear that bees are weakened by all kind of pesticides, spread on crops such as the neonicotinoids family (imidacloprid, thiamethoxam,or dothianidine), or the pyrethroids family (deltamethrin). Theses substances affect the insect nervous system. Bees, for example, become unable to return to their hive. Similarly, the GMOs crops that produce themselves their insecticide as the Bt corn of Mon­santo, are poison to pollinators.

However, bees are not just threatened by chemicals but are also attacked by more natural agents such as parasites ot the acarid family. The Varroa destructor also called the Varroa jacobsoni arrived in Europe in the 60s and are important vectors of transmission of pathogenic viruses in bees colonies. In recent years all over the world, especially across the Atlantic, varroa mites have become resistant to most traditional chemical treatments. That is why there are suspected to be the cause of the current epidemic. However, again no direct link and no clear correlation could be established. Other parasites exist and cause problems in the bee colonies but most of them, even if their number is increasing, were already presents and cannot explain the sudden bee mortality.

Bees are also attacked by fungis, including Nosema cerenae, which was found on the bodies of dead bees. Recent in Europe, it is a fungus present for over 10 years in the United States thats seems to be more an opportunist than a real cause of the epidemic. Other insects from Asia or Africa also threaten European bees, such as the small hive beetle Aethina tumida and the Asian hornet Vespa velutina nigrithorax that attacks hives and spreads quickly because it has no natural predators in Europe.

Man also weakens the bees by restructuring the landscape and removing hedges where they live, reducing the floral biodiversity by just preserving a few agricultural species and practicing monoculture in hundreds of hectares. Moreover, the latest climate change, at least in our region, causes increasing droughts and warmer winters, and weakens the bees that go out of the hives too early and suffer from the lack of pollen available.

Honey bees in particular can also be victims of industrial agriculture. Some farming methods are intensive (constant transhumance, too frequent honey or pollen harvesting) or too violent (smoking process) and toxic (acaricide treatment and antibiotics). The result of these practices that are still rare according to some experts of beekeeping is that the queens are exhausted after one year instead of two or three.

The last element found to explain the disappearance of bees is electromagnetic pollution. A German study showed that since the advent and massification of mobile phones, it prevented the bees to find their way as they use the same wavelenghts to communicate. The establishment of the so-called third generation telephony, whose antennas are everywhere, would be a hypothesis to explain why bees do not return to the hive. Moreovere, these waves strongly affect the bees resistance to parasites and that would explain the immune deficency observed on many of them.

Most scientific studies on bee mortality have focused on the analysis of factors isolated from each other. But all indicators show that the facts are numerous and that synergies exist between them. For example, in the case of electromagnetic pollution, the weakened bees are then destroyed by the common virus and parasites.

Similarly, the fungi that attack insects are much stronger when the insect is already weakened by sublethal doses of insecticides from the neonicotinoid family.

It is common to treat some crops with a mix of fungal spores such as Nosema and imidacloprid (against grasshoppers with Nosema locustea and against corn borer with Nosema pyrausta for example), whose sinergy is powerful and devastating. Let us remind that small doses of imidacloprid have been found in most of the collapsed hives. Fungis would be then opportunist that would take advantage of the situation.

Similarly, we know that some fungicides or herbicides combined with insecticides can dramatically increase the toxicity of these (over than 1000 times).

In short, it seems clear that bees are exposed to toxic cocktails whose effects can not be measured directly because the doses are infinitesimals and the bees die more slowly.

In their last conference, US scientists admitted that they found several types of pesticides in hives and no one knows exactly what can be the consequences of these synergies.

Consequences - About the major role of pollinators

Most studies focus on honey bee, that is to say Apis mellifera (Europe, Africa, America, Australia) and Apis cerena (South and East Asia). Indeed, these two species do 85% of the pollination of all plant species. But let us not forget what is happening to other wild pollinators such as bumblebees, bombus sp., or other insects who also suffer from human activities.

Several species of bombus are threatened with extinction, and a recent british and dutch study shows the parallel collapse of population of pollinators and plants associated with them, without specifying whether they are plants or insects that disappear first. With the disappearance of bees is 65% of agricultural plants that are endangered, 35% of our diet. The fruit and vegetable crops depend on bees and now the United States had to import massively Australian bees for their apple orchards and blueberry fields. 80 % of flowering plants depend on this kind of insects for their reproduction and survival. If they were to disappear, the change would be so huge that it is impossible to measure the consequences for the environment and humans. The bee is considered as a sentinel of environment in many current research. Its disappereance reflects the state of our planet at the beginning of this twenty-first century.

Despite the evidence that the current agricultural model is the first responsible for the disappearance of browsers (space modification, monoculture, pesticide, stress) solutions are less ambitious. We keep looking for one-time causes studying parasites and other diseases and we set up "protected" spaces but this could be just a patch, hoping to maintain a sufficently large stock of biodiversity to face subsequent issues that are coming. 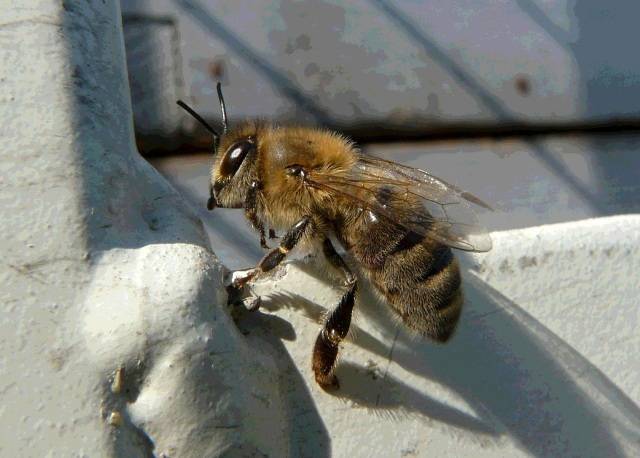