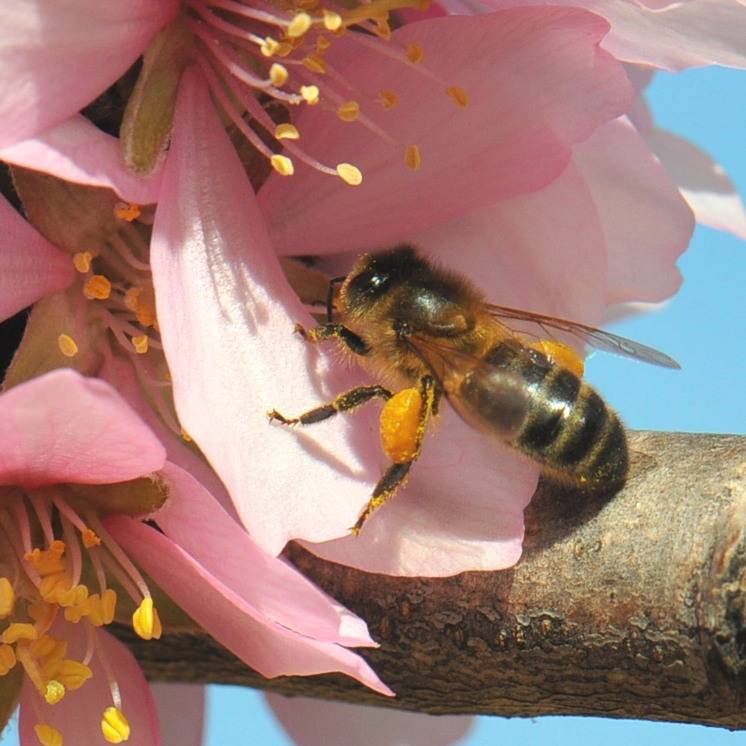 There are many scientific studies that prove with certainty the hazards of these substances on bees. These are the "plant protection products" more commonly known as pesticides that kill our bees all around the world. The bee, a key player in the almond pollination "
The use massive, irrational, of these products in recent decades has led to a profound and sometimes irreversible pollution of groundwater and soil

All sectors of agriculture are involved: cereal, fruit, livestock, etc. There is no industry that escapes this model of industrial agriculture towards more profits, and immediate profitability without measuring the health long term consequences.

The new generation of pesticides have a very high toxicity, they are neurotoxic, called systemic: the molecule is wrapped around the seed and diffuses directly into the plant through the channel of the sap. Remanence is high, soils are soaked for several years.

Pesticides are everywhere, in water, in soil, in the air, in our food, in the depths of our body: in the children's hair (a result of recent studies) This is a major health threat to humanity.

The bee, a key player in the pollination. Pesticides are also the main cause of the decline of bees in the world.

Violent and mass poisoning of bees are fortunately less common than in the past.
The legislation aims to better regulate the spraying of pesticides, fungicides, herbicides on crops (the prohibition to treat during the day is recent)

But beyond these products that can remain active for a long time in the soil and replace the nectar of plants, the bees are exposed constantly and everywhere by nonlethal and infinitesimal doses that can seriously affect their health and behavior:

It can affect their nervous system several months after contact.
The case of 5000 decimated hives in the Ariege during the winter 2013 because of products for treatment and care of animals is one example.
During the summer, the bees have assimilated and stored in their fat infinitesimal doses of products.
And it is during the winter, months after the contact, that the bees consuming their fat lose their vital instinct to gather in clusters to protect themselves from the cold, instint yet registered deep within their genome...

Our long history of beekeeping, and our proximity to the bees have enabled us to observe many changes and many anomalies in the behavior of bees over the past decade.
It seems that one can establish a direct relationship between the emergence of these new pesticides and the famous collapse of bee colonies syndrome.

Many of us beekepers relate strange behavior, unusual for bees.

With these neurotoxic, when bees do not die immediately, they lose their heads as if they were under the influence of drugs.
At the time of the Gaucho, they lost the sense of direction and die in the field because they could not find the location of their hive.

Pesticides are endocrine disruptors. The process of natural reproduction of the bee appears to be directly affected:
There is an upsurge in drone colonies which suggests that queens are poorly fertilized by males increasingly sterile.
Queens who once could be prolific 4 or 5 years, quickly lose their vitality. They should be replaced every 2 years to prevent the colony from collapsing
The judgments of the lay are common, they can occur at any time even during the honey flow.
In the fall, we see many colonies collapse, even the young queen does not return to its spawning.

Bees' natural defenses are weakened, they are less resistant to bacteria and various parasites. And above all the bees no longer work as before. It is noted throughout production declines very important. On the locations of apiaries for Rhododendron where one was fluent in three honey supers per hive is now coming painfully to make one.
It was clear impression that bees are reluctant to work, they constantly struggle against an unseen evil.

The real bee disease is called Pesticides << >> The example of Italy is revealing: since the abolition of the neonicotinoids bee deaths have almost stopped.

A new evil threatens our bees, it is called GMO: A plant is most often genetically modified to resist to massive spraying of herbicides, but can also produce its own insecticide.
Note that sellers of GMOs seeds also produce the famous herbicides.........

The salvation of our bees lays on public opinion. Talk around you, spread the information.
Bees need us! and we need them. This is more than ever the time to act!